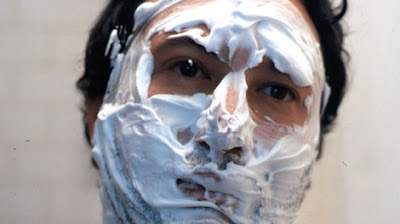 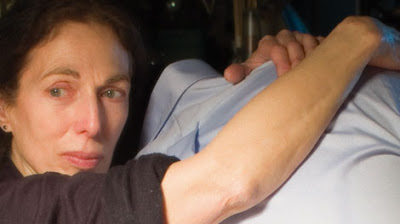 Inter-generational relationships are at play on several levels in Azazel Jacobs entertaining and thoughtful new film. Most simply, the film tells the story of Mikey, who visits his artist parents in New York, then finds himself unable to return to his wife and child in California. The film documents his life crisis as, refusing his wife's calls and giving escalating lies about his reasons for not returning home, he visits old friends, tracks down a highschool sweetheart, and retreats into his childhood bedroom, toys, and scrapbooks of memorabilia.

But things are not quite as the seem. Director Jacobs is the son of filmmaker and artist Ken and Flo Jacobs, who are cast here as the parents, and the film is shot almost entirely in the Tribeca loft where they have lived for forty years - and where Azazel himself grew up. Of course, the major shift is to replace Azazel - upcoming independent film maker - with Mikey as a thirty something without such promising prospects, whose only connection with his creativity is singing re-found high school songs on a guitar.

The film sets its premise up from the go, and then broadens that territory. Mikey's emotional crisis escalates, but it's not the kind of film where he'll fall apart completely - it's too much about watching him suspended between New York and California, boyhood and adulthood.  Matt Boren convincingly maintains that uncertainty through pose, clothes, and facial gestures, whilst Ken and Flo Jacobs are a reminder why directors like to use non-actors, even if they're not normally their own parents. For most of the film they get on with the established routines of their lives, saying very little, but always watchful and caring, trying to figure out what is happening to their son.

Indeed, Azazel's style of film making is drawn to the communicative possibilities of silence. It is at its strongest when it can quietly observe a body in some sort of non-verbal narrative. Mikey buys beers for some teenagers and then lingers by them, hoping to be welcomed into their group, as if trying to connect to his own youth, but just becoming increasingly awkward. In another such scene, large framed and overweight, he sits on his mother's lap and slowly breaks down into tears, as her hand strokes his back.

Of course, whilst Momma's Man is accomplished in its own right, the film gains added frisson from the real relationships and environments involved. As Ken and Flo get on with their daily lives, they are shown together watching and discussing (the older) Jacobs' films. A Ken Jacobs film involving Azazel as a child is also included here, as a flashback.  Whilst their appearance in Momma's Man is fictional, it does suggest a fascinating insight into how Jacob's creativity is rooted in this space, and in sharing and discussing work with Flo. When K and F discuss a project the intensity of their gaze, surrounded by an array of improvised looking techno-gadgetry, gives each film the aura of cinema being invented over again. 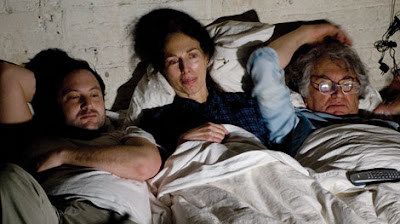 Part of this, of course, is because the real star of this film is the Jacobs' Tribeca apartment. Azazel has observed how the impulse for the film was initially a desire to document the space, in its rapidly changing neighbourhood, before it became entirely a reserve for wealthy young bankers. It's a labyrinthine space, almost without definable rooms, no boundary between living space and work space, between the activities of a domestic life - Flo is constantly preparing and serving food - and those of Ken's films or Flo's drawings. It appears here as an endless Borgesian library, but one rooted in a settled domestic rhythm.

If it's a space that would delight Bachelardians, it almost overwhelms Mikey. To sleep he crawls in and out of its nooks. At the most acute stage of his "condition", he cannot leave the loft - an impasse he breaks out of by hurling himself down the stairs, in an apt metaphor for the shift from boyhood into adulthood.  Several times, when he is able to leave, he meets an old school friend who, too, seems to inhabit a parents' flat full of art objects amongst which his own personal crises are acted out. It is with regard to these apartments that the generational crisis is most acute, for reasons partly psychoanalytical and partly to do with real estate prices.  In this film these long standing family dwellings are New York  - few skylines or street scenes, the later invariably snow covered and difficult to negotiate.

This is a subtle film, and it's tone makes no grand points about generations, or the effects of sixties bohemianism on their generation of children now in their mid-thirties and embroiled - as portrayed here - in a variety of life crises. It's not nostalgic, but it does portray a younger generation struggling to acquire the purpose, life-work balance and honesty of the older, and thus hints at murkier psychological waters. But then, hovering close to Mikey, there is always Azazel Who Is Not Mikey, laughing at those who have to go to war with their parents, or who blame them for their plights.