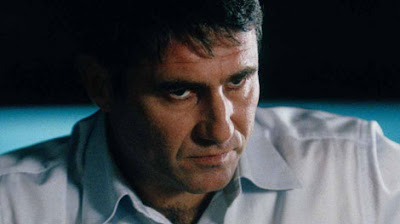 Something is going very wrong with this film.... 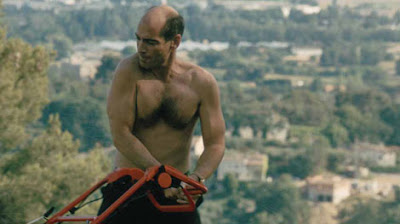 If the Queen is worried about Kate Middleton not having a job, then they probably shouldn't plan a palace outing to see Le Parc if, god help us, it gets a cinema release. Focussed on the residents of a gated housing community in Nice, the film shows the truly psychotic ends that a combination of vast personal wealth, free time and a depressive personality can lead you to.

Actually, if Le Parc had started off as ridiculously as it concluded then I would probably never have got to connect its own machinations with those of the English monarchy, as I would have quickly wound up in an armchair in the Benugo bar at BFI Southbank. For Le Parc is one of those frustrating films that starts on relatively sane and thoughtful ground, as it initially focusses on the struggles of a teenage boy who, not without justification, struggles to find enough meaning in the life around him in Le Parc to warrant getting out of bed.

Actually, considering who else lives in Le Parc, he's quite fortunate. Helen and Georges, his parents, are by far the sanest members of the community, even if his father has insecurity issues over earning such a high maintenance lifestyle through a career as a mouthwash salesman. Not that, judging from what we see here, he has time to go to work what with all tree felling, golf playing, fishing, and sex there is to fit into an average day in la la land.

Helen and Georges also love their son, and genuinely struggle to understand his illness. Fortunately there is a healer living above the funeral parlor in town who heals him with a quick ten minutes of verbal mind-games. Actually, joking aside, this, too, works in a moody, charged atmosphere kind of way. It's a reminder of the imagistic, hyperreality that could have made this a truly disturbing cinematic experience.

Which, of course, it was, but in the bad sense. The ridiculous element comes from Le Parc newcomer Barr. If Barr's own life struggles for meaning, that's nothing commpared to the cataclysmic effects his own character development has on the credibility of this film, pushing any sense of exploring depressive illness far into the ridiculous. Even the healer above the funeral parlor just tells him to get out, when, on first meeting, Barr explains - PLOT SPOILER COMING UP - his cunning plan of crucifying his neighbour's son. And that's crucified as in Jesus, stylistically speaking.

Usually, films that kick off with slow, static shots of buildings and landscapes, trees blowing in the wind, long takes in which action slowly unfolds, a careful attention to bodies and landscapes, do so to cultivate a sense of openness and expectancy about what might happen. They leave room for the viewer, as critical cliche has it. It's rather disconcerting, then, when you're in this room - or, more appropriately for Le Parc, taking a dip in the outdoor pool - and it becomes filled by one enormous, ridiculous plot development after another.

Barr has lots of issues, and I won't relive them here, both for your sake and mine, but one of them, I think, involved murdering a woman because he just had to live in a house with yellow walls. I know it's easy to mock films, and I know I could take this picky stance about films I have loved recently, but I sat through 109  minutes of this and I'm searching to redeem that time.

Let's try and be positive. The film considers the ethics of gated communities, juxtaposing its inhabitants isolated and privileged lives - although not so privileged you'd consider for a moment moving in - alongside television news reports of riots erupting throughout France. At least pre-fall it's a powerful juxtaposition, the images themselves not shown but heard as various characters watch television, attempting or not to comprehend what they see in front of them.

Perhaps, too, the films deterioration is itself the only option, if one seeks any kind of human emotion amongst the denizens of Le Parc. Unfortunately, in practice, the film attempted to get ever more emotionally intense, as the line of my own emotional engagement plummeted ever more downwards.

That's enough of being positive. The sound is another level where the film promises much. The character of George, for example, is largely established through an opening scene of him munching and crunching his way through a light lunch. But when yet another crisis point in the film is accompanied by the building up and then erupting of a storm, one has to question the wisdom of building luxury dwellings in such a meteorologically volatile area.

Perhaps in the end it is reassuring that a dystopian vision should be so implausible and unrealistic. It makes you realise the delicacy of acting out such visions - giving voice to an emotional intensity that is hyper-real without creating something ridiculous. If it's a theme that interests you, rent Alphaville or go and see Philippe Grandrieux's Un Lac. Don't waste your time here, unless you want to see how the delicacy of dystopia can go horribly awry about forty five minutes in.